Military and legendary cases are crates that contain various items that can be used by players for progression. They are acquired by completing certain feats in-game.

Obtained cases are stored and can be opened at Trader's Military Kit Shop. 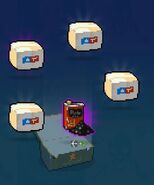 Visual bug of a prematurely revealed reward.
Add a photo to this gallery
Retrieved from "https://dead-ahead-zombie-warfare.fandom.com/wiki/Military_Case?oldid=12948"
Community content is available under CC-BY-SA unless otherwise noted.