Skirmish, known alternatively as League, is an in-game mode in which players fight each other's unit teams. While not being an actual PvP (player versus player) mode, Skirmish comes close to it by setting up multiple opposing players' team compositions against the player's own.

This mode is unlocked from the Star Reward system after the player collects 15 stars.

Players build their team with any available units that they have. Independent from the main game, the game mode consists of ten leagues. The player proceeds to the next league after staying in the top half of the leaderboards after a countdown of 48 hours. Players can also move up to the next league if enough victories are reached by choosing to fight everyone at once and winning over most (if not all) of the other participants consecutively.

Some restrictions apply to the game mode as it plays very differently to the main game.

Some units are excluded from the game mode:

In addition, some perks and abilities are disabled or function differently for this game mode:

A new league starts every 48 hours. Other players will join as soon as they open the PvP menu after their previous league ends.

The player builds their team with units with a maximum cost of 100 courage points on a 4x4 field grid. They then fight other players' teams and earn a dog tag for each win. Whenever one of the other players manages to win a fight against the player's team, they take a dog tag back. Players have the choice to fight one specific player by pressing the button beside their dog tags, or all of them by pressing the "Fight All" button in the lower right corner.

Ranking up in Skirmish works through collecting and holding as many dog tags as the player can. After the timer ends, the player will either stay in the same league and earn some coins (if placed below the lower half) or receive a few military cases and proceed to the next league (If placed in the top half) until the tenth and final league, in which players will stay for the rest of the season, although they still can fight for top 10 prizes.

The player also receives a coin reward every time they beat other player's team, with the amount varying across the different league levels. Sometimes during a Skirmish battle, players may earn a common or rare upgrade item from a random enemy unit they kill.

Each Skirmish season lasts for 1 month. By the time the season ends, the player receives a seasonal reward depending on their achieved league rank. Immediately afterward, they then go down three league levels.

Ranks are small icons that can be seen next to every player's nickname. They indicate how many times the player has managed to stay in league 10. These ranks are not only displayed in the Skirmish leaderboard but in the player's event leaderboard scores and missions deck as well. 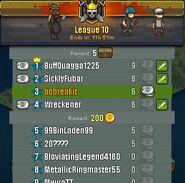 Pre 2.7.8 team editing menu.
Add a photo to this gallery

League 10
Retrieved from "https://dead-ahead-zombie-warfare.fandom.com/wiki/Skirmish?oldid=13523"
Community content is available under CC-BY-SA unless otherwise noted.