Trader is an NPC that can be accessed from the main game menu. He offers the player a few opportunities to buy valuable items or to sell them.

Trader runs a store called the Military Kit Shop, in which he offers a selection of four random items every 24 hours.

Trader can exchange player's items for coins. He buys items for a third of their regular price.

As of update 2.7.0, one of the four items available for sale will be a free daily gift.

Trader offers players the possibility to craft higher tier upgrade items by converting some of the player's items.

Each used item adds a 33.3% chance that the result will be one tier higher than that specific item. For example, using two +1 items and one +2 item will make the final result have a 66.7% chance of being a +2 item and a 33.3% chance of being a +3 item. Although this can potentially result in crafting a +3 item using one or two +1 items and paying fewer coins, the chance of success is a gamble entirely up to RNG. On the other hand, using three of the same tier items will guarantee in earning the next highest tier item.

The resulted item's type is also dependant on which items were used and uses the same percentage values as with tiers. For example, using one ranged item, one melee item, and one fortune item may result in an item with any of the mentioned types but never a health type item. The order in which the items are added into the three slots is not important. 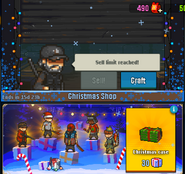 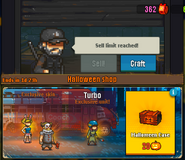 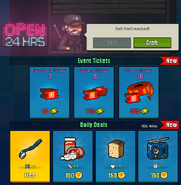 1.5.0 Trader, with new features such as a limited amount of coins for item reselling and bus parts in store.

1.0.0 Trader. He had an infinite amount of coins to buy items but had limited features.
Add a photo to this gallery

Retrieved from "https://dead-ahead-zombie-warfare.fandom.com/wiki/Trader?oldid=12983"
Community content is available under CC-BY-SA unless otherwise noted.