Start a Wiki
Upgrade items are items that are consumed to permanently upgrade your units, increasing their stats. Players must spend coins in order to use Items for upgrades. items vary from +1 common items to +2 rare items and +3 legendary items. Another type of upgrade items are bus attachments, which adds extra durability points to the bus.

Upgrades increase health, damage, and fortune for units and durability for the bus. The main difference between unit and bus items is that the former is permanent while you can rearrange the parts for the latter.

The player can reset each upgrade level of a unit to use better items by tapping the reset button (two arrows forming a circle) on the top-left corner of the unit UI window. Previously used items and coins spent for that upgrade level won't be refunded. It is also possible to use items of lower rarity to decrease a unit's stats if players wish to do so.

Support items, e.g., Empty Barrel, Medkit, and Turret, do not require items in order to upgrade. 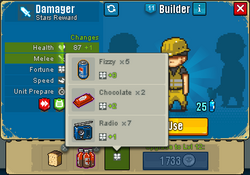 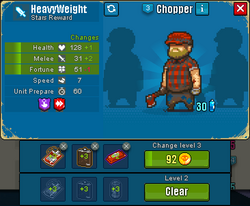 There are several ways to acquire items.

All types of items can be found in military cases, which can be acquired in many different ways.

Up to four Items (one of which is free) can be directly purchased from Trader under Daily Deals every 24 hours.

Common and rare unit items can be obtained as a drop in specific missions by either being a possible reward for destroying the barricade, i.e. finishing the level, or from interacting with tappable vehicles with closed doors within the level's background. These vehicles shake on their own from time to time, indicating they can be interacted with. However, these cars sometimes carry an unwanted zombie as well. If players opened a vehicle and fail the mission, the dropped item will not be acquired and the vehicle with the item (and the zombie that it carries) must be tapped again after re-entering the mission. Tappable vehicles won't appear from stage 7 onwards.

Levels with item rewards have a box icon on their map tile. The amount of boxes displays the number of items on the level and the chances of receiving it upon mission completion.

Common and rare items can also drop during PvP fights from a random defeated enemy unit.

Common and rare items can be acquired from daily gifts 1 and 2.

Legendary unit items can be obtained from legendary cases, as drops during 20+ levels of Corn Farm Event, by crafting via Trader's Military Kit Shop, and by purchasing them from him. Very rarely, a legendary item can be found in a military case.

Leveling up will reward players a predetermined item. 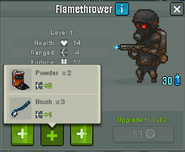 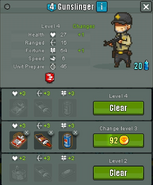 Level reset menu on Gunslinger's page before update 2.7.0.
Add a photo to this gallery

Retrieved from "https://dead-ahead-zombie-warfare.fandom.com/wiki/Upgrade_Items?oldid=10556"
Community content is available under CC-BY-SA unless otherwise noted.